The economy is never cool after a stock market crash. When is it going to recover?

I have been looking at the question since 1982 when it first perplexed me. Financial people will never talk about it because for most of the cycle they are too busy studying quarterly returns (and 52% of the time they are winning). Only analysis that moves beyond quarters can deal with Okuns GDP Gap. Only a massive drop in the Stock market gets this problem attention.

This stock market drop was waiting for us even before the virus. You can think of the Virus as a War, and while we focus on it, we bury ourselves further and further into Okun's GDP Gap.

This debate squats like a toad over economic history and development economics. Why do we struggle to maintain potential GDP? After looking at it for 40 years I have to conclude that  it is our cost of having the capitalist system on our side. This will be heresy to financial analysts because they cannot move out of the framework that the market is the ultimate allocator of capital - it is not. The market has no vision  -  it always thinks too short-run. Payments on the Porshe dominate the market's thinking.

There is a nasty book called The Deluge, by Adam Tooze  ( I read it at Pinnacle Point in Dec) that covers the 1914- 1929 period. Churchill got the Nobel prize for literature for his study on this period. Both Churchill and Tooze bind the cycle not from 1929 to 1945, but all the way back to Widrow Wilson in 1914. The period  1914 to 1945 is known in economic political history as the Second 30 Year War.

In the same way, as the US moved in the post-1929 period to become GDP dominant, expect China to do the same - the US is likely to be the big loser here, starting with this $2.2 Trn package spilling out into nowhere. It has nowhere to go except to possibly inflate financial assets and food prices, but it can't fix GDP.  You can't eat sháres and in the modern digital day you can't even wípe your ass with them, you need to binge-buy toilet paper to do that.

It is a 200-year-old problem, as old as capitalism itself. Without War, capitalism is not able to bootstrap itself out of deflation. 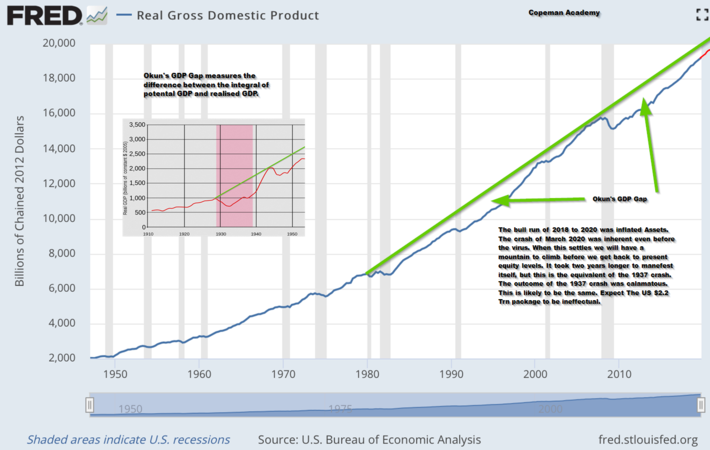